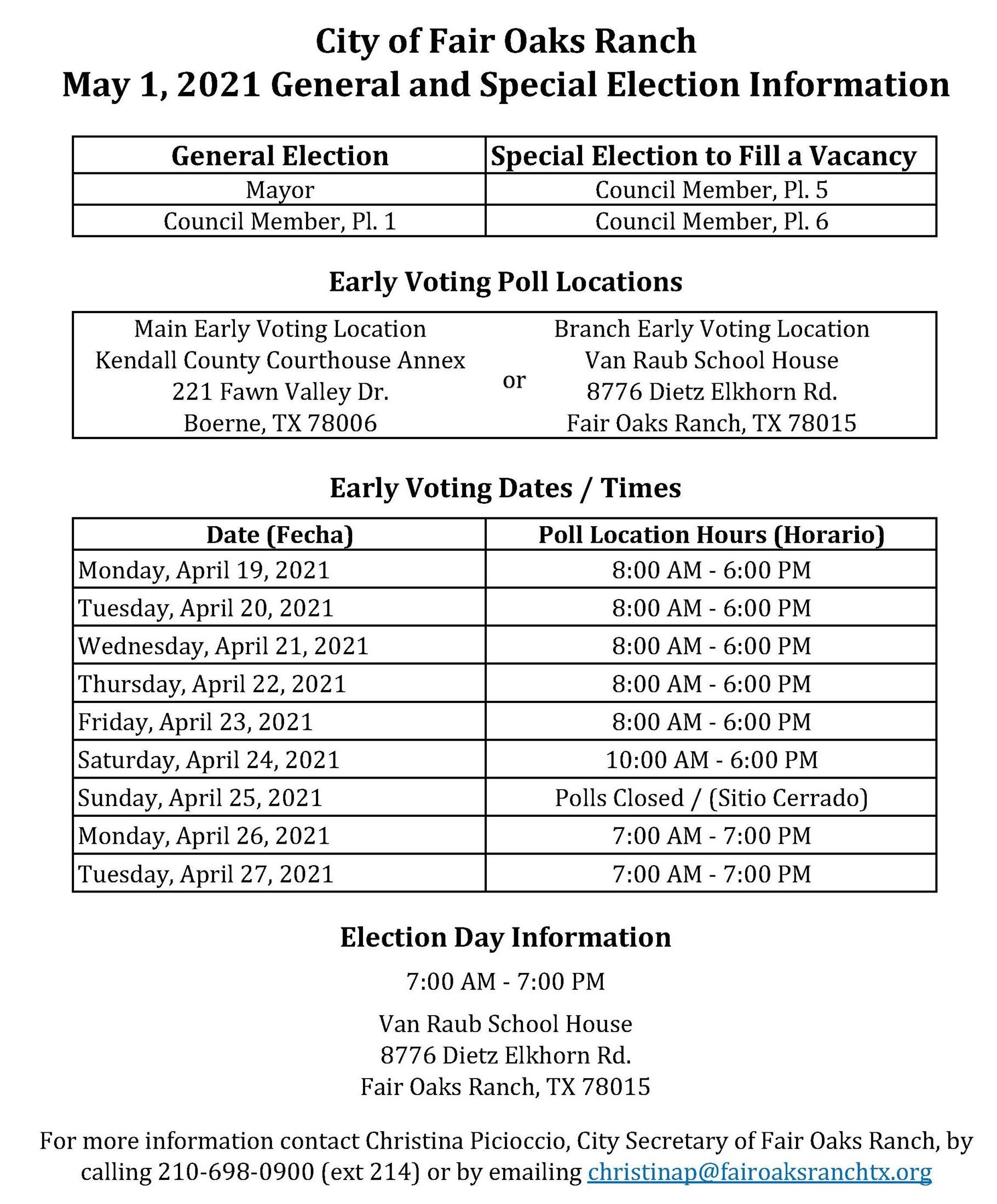 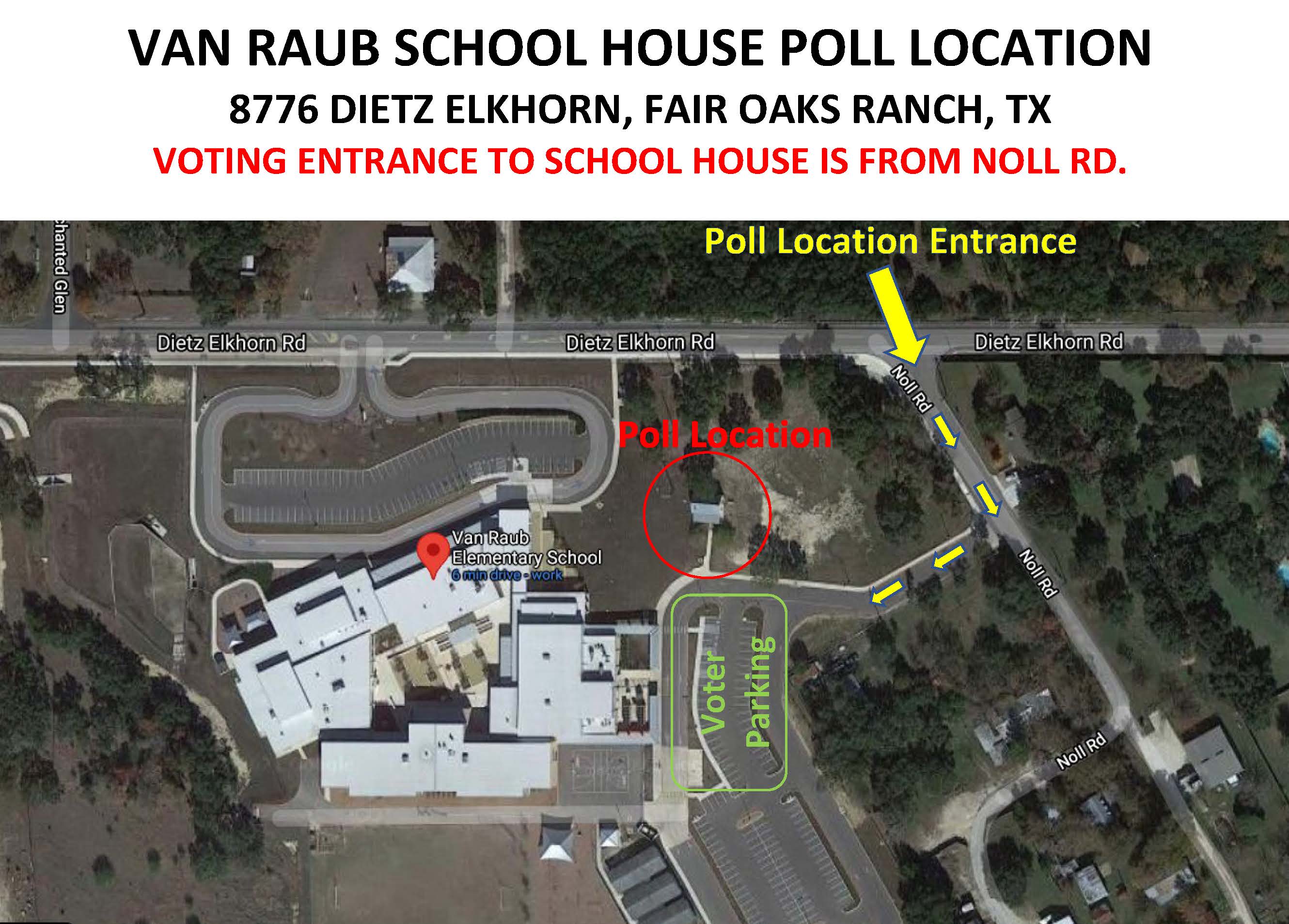 See a sample ballot and more information from the Kendall County Elections Department by visiting their webpage here.

Applications for Ballot by Mail

Applications for ballot by mail must be received by the Early Voting Clerk for the county in which you reside by close of business on Tuesday, April 20, 2021(not simply postmarked).

* IF YOU FAX OR E-MAIL YOUR APPLICATION TO THE EARLY VOTING CLERK, YOU MUST ALSO MAIL THE APPLICATION SO THAT THE CLERK RECEIVES IT NO LATER THAN THE FOURTH BUSINESS DAY AFTER THE DAY THE CLERK RECEIVED YOUR FAXED OR EMAILED APPLICATION. If you fax or e-mail your application by the deadline noted below, your application will be considered complete and timely as long as the original is received by the early voting clerk by the fourth business day after it was submitted by fax or e-mail.

The City Secretary’s office conducts and oversees the City election process. Open Council seats are at large positions; you may file for any one seat regardless of where you live in Fair Oaks Ranch. Select the following links for more information regarding our current Mayor and City Council.

Filing dates and times for the May 1, 2021 election were January 13, 2021 to February 12, 2021, 8 AM - 5 PM; Monday - Friday (unless there is a holiday). Please select the following link to view the Notice of Deadline to File Applications for Place on the General Election Ballot.

City Council elections are held the first Saturday in May each year. Future city elections will be:

The following applications have been received for the May 1, 2021 Election  (List of applicants will be updated as new applications are received.)

On Wednesday, January 13, 2021 Council Member Gregory C. Maxton applied for a place on the ballot for the position of Mayor. A Special Election will be included on the May 1, 2021 ballot to fill the Place 6 vacancy (as noted in the table above).

On Friday, January 29, 2021 Council Member Snehal Patel applied for a place on the ballot for the position of Mayor. A Special Election will be included on the May 1, 2021 ballot to fill the Place 5 vacancy (as noted in the table above).

Section 3.02 of the CITY CHARTER identifies the Qualifications for Office as the following:

The Mayor and each Council Member shall:

Furthermore, Sub-chapter A, Sec 141.001 of the ELECTION CODE lists the following eligibility requirements:

(The information below is provided as a courtesy.  Please refer to the Election Code Official Link for possible updates).

(A)    To be eligible to be a candidate for, or elected or appointed to, a public elective office in this state, a person must:

(2)    be 18 years of age or older on the first day of the term to be filled at the election or on the date of appointment, as applicable;

(3)    have not been determined by a final judgment of a court exercising probate jurisdiction to be:

(a)    totally mentally incapacitated; or

(b)    partially mentally incapacitated without the right to vote;

(4)    have not been finally convicted of a felony from which the person has not been pardoned or otherwise released from the resulting disabilities;

(5)    have resided continuously in the state for 12 months and in the territory from which the office is elected for six months immediately preceding the following date:

(a)    for a candidate whose name is to appear on a general primary election ballot, the date of the regular filing deadline for a candidate’s application for a place on the ballot;

(b)    for an independent candidate, the date of the regular filing deadline for a candidate’s application for a place on the ballot;

(c)    for a write-in candidate, the date of the election at which the candidate’s name is written in;

(d)    for a party nominee who is nominated by any method other than by primary election, the date the nomination is made; and

(e)    for an appointee to an office, the date the appointment is made;

(6)    on the date described by Subdivision (5), be registered to vote in the territory from which the office is elected; and

(7)    satisfy any other eligibility requirements prescribed by law for the office.

(a-1) For purposes of satisfying the continuous residency requirement of Subsection (a)(5), a person who claims an intent to return to a residence after a temporary absence may establish that intent only if the person:

(1)  has made a reasonable and substantive attempt to effectuate that intent; and

(2)  has a legal right and the practical ability to return to the residence.

(a-2)  Subsection (a-1) does not apply to a person displaced from the person's residence due to a declared local, state, or national disaster.

(a-3)  The authority with whom an application for a place on a general primary election ballot is filed under Section 172.022 shall, to the extent permitted by law, use Subsections (a) and (a-1) in determining whether a candidate meets the residency requirements for a public elective office.

(B)    A statute outside this code supersedes Subsection (a) to the extent of any conflict.

(C)    Subsection (a) does not apply to an office for which the federal or state constitution or a statute outside this code prescribes exclusive eligibility requirements.

For an Application for a Place on the Ballot, visit the Secretary of State website, obtain a copy at City Hall, or click on the links below:

Application for a Place on the General Election Ballot

Application for a Place on the Special Election Ballot

Title 15 of the Texas Election Code pertains to campaign contributions and expenditure.  All financial reports must be completed by the candidate’s campaign treasurer, signed by the candidate, and filed in the City Secretary’s office.  Questions regarding the forms, reporting procedures, contributions, or expenditures, are to be directed to the Texas Ethics Commission at (512) 463-5800 as the election law strictly limits the role of the City Secretary’s office to accepting and filing the various applications, affidavits, and statements, and noting the date of filing thereon.